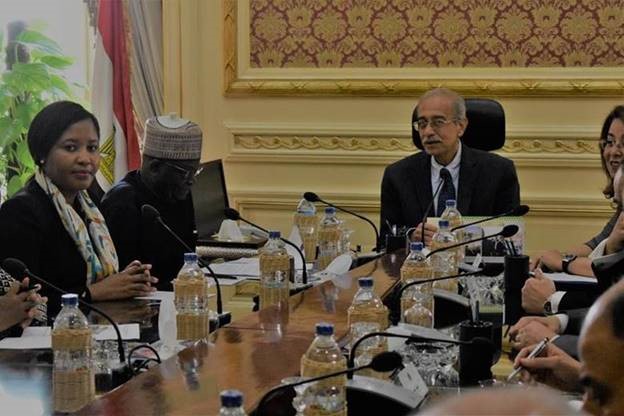 Support mission continues as Egypt gears up for the peer review 1. The APRM Support Mission in Niger was conducted from 20 to 22 January 2018. The Mission was led by Prof. Fatima Zohra Karadja, Lead Member of the APRM Panel of Eminent Persons for Niger, accompanied by Mr. Jean-Yves ADOU, Head of Division and Country Review Coordinator for Niger.

2. The objective of this support mission was not only to raise awareness among stakeholders on the APRM process, but mostly the signing of a Memorandum of understanding that will mark the launching of APRM Technical Reviews in Niger.

3. After meeting with Mrs. Ousseini Hadizatou Yacouba, the Deputy Chief of Staff to the President of the Republic and APRM Focal Point for Niger, the Support Mission team successively met with the National Governance Committee and all APRM stakeholders in Niger, including the civil society and the private sector. The various meetings with stakeholders were very rewarding as can be judged by the quality and level of attendance on each occasion. Participants in these meetings expressed their willingness to take ownership of the APRM process not only in the capital city, but also in the regions, divisions and villages.

4. The Mission team extended its visits to regional bureaux of Strategic partners, including the United Nations Economic Commission for Africa (UNECA) and the United Nations Development Programme (UNDP). These partners committed to support the APRM process at the national level, and appointed their APRM Focal Points who will be working with the APRM National Secretariat to prepare the Self-Assessment Process.

5. APRM delegation was received in audience by the Third Vice-President of the National Assembly and the Prime Minister of the Republic of Niger respectively. These meetings with State authorities gave the Mission team the opportunity to brief them on the mission’s objectives, and also to present to them the technical, financial and social mobilisation resources that are needed for a successful APRM process in Niger. The State authorities on their part assured the Mission team of their determination to support APRM process at the national and continental levels.

6. The mission ended with the signing of a Memorandum of Understanding on the APRM Technical Reviews in Niger as well as a press briefing conducted by Prof. Fatima Zohra Karadja, Lead Panel Member for Niger and Mrs Ousseini Hadizatou Yacouba, Deputy Chief of Staff to the President of the Republic and APRM Focal Point for Niger. The following actions will be carried out as the way forward in the APRM process in Niger: awareness raising workshops due for the last week of February 2018; development of a road map and the needed communication strategy for a successful launching of APRM technical review exercises in Niger.